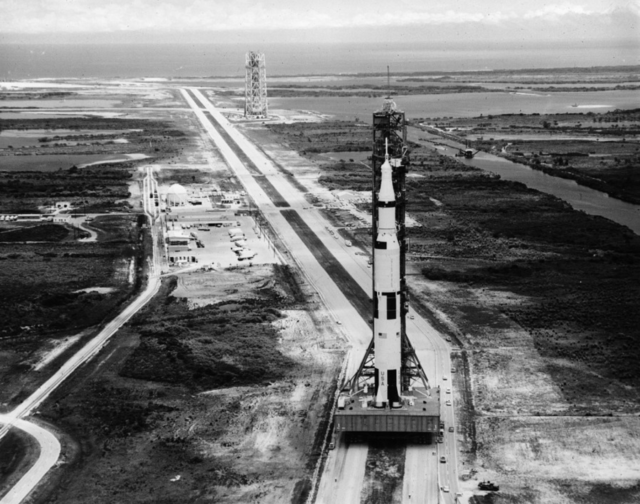 The Saturn V moves at one mile per hour down the crawlerway toward pad 39A. Image NASA.

Mind me, deficits do matter, but not at this critical moment…

Who wouldn’t want to finally end the deadlock and redesign our infrastructure for the needs of the 21st century? Georgia could be a final tale of the two Americas. The question remains whether one side will finally acquires enough leverage to tilt us towards unity again. Unity needs optimism, optimism needs confidence, and confidence needs vision.

Contrary to what is believed, the deficit does not work like a household budget. A household doesn’t issue debt like a government. (consooomer debt isn’t comparable to government debt) Taxpayers don’t fund everything. Investors who purchase government debt instruments also finance (federal, state, and local governments). Debt is a continuous tool. It is not repaid like a household debt. It works more like corporate debt. By the time the securities mature or roll over, the economy has already grown by the x amount thanks to the original deficit financing. Debt as an investment is a necessity.

Furthermore deficit spending strengthens our national security by enabling funding flexibility. The US treasury market is the most liquid in the world. Investors can sell and buy US Treasuries to one another, which further strengthens our financing capacity. Now that yields are low, it’s a good time to go on a buying spree.

What was the infrastructure response after the Great Financial Crises? Filling a few potholes and painting over shitty old bridges. It did little to nothing to create a new modern means of transport. Meanwhile, take a look at China during this time.

Imagine if China believed they were as broke as we pretend to be. Imagine if you were the guy who thought the Apollo Program would cause hyperinflation. Instead, it brought us new technologies that enabled new industries.

It’s time for the weak fiscal hawks to step aside and let courageous daydreamers propel us into the 21st century and beyond. It’s time to leave the old world of deficit scolding behind and revisit some of its visionaries instead.