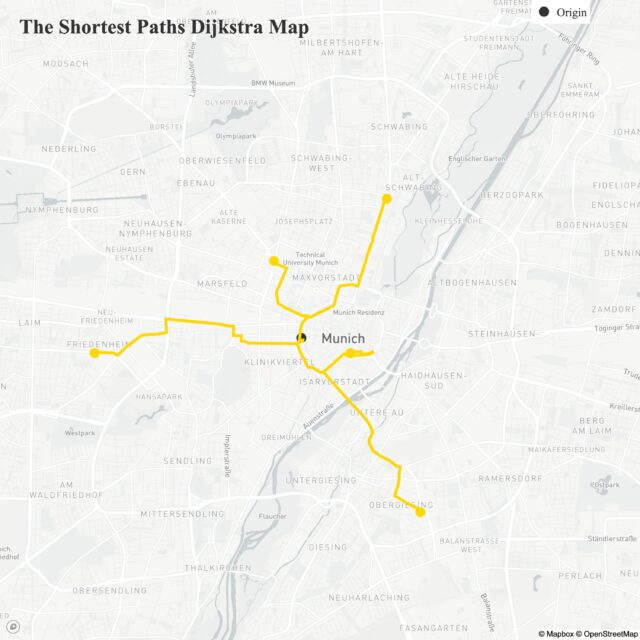 The following example uses OSMnx to generate the optimal path between two geocoordinates and between one and many points and plotting the path(s) on a Plotly map. This is a quick and simple example that data scientists can use to illustrate a path(s) for their professional or academic papers.

A brief file structure overview of the repository is provided. The dijkstra_map.py is in the root directory. The data folder houses a list of target geocoordinates in a csv file. The out map is generated in the output folder.

Before jumping into the code the following requirements and packages are needed to run the code:

First the packages that were just installed are imported into our file dijkstra_map.py

Next a function is created which returns a list of geocoordinates belonging to the optimal path between two geocoordinates. The function is needed to iterate through several target points. The function takes three parameters an origin coordinate, a target coordinate, and a perimeter around those coordinates. The perimeter should be larger for points that a further from another, but a small as possible to keep processing time practical. For plotting routes in a city a perimeter value between 0.10 and 0.20 is should suffice.

Inside the function a cache configuration is an optional method to store maps from OSM. This is especially resourceful for storing larger maps as it requires fewer requests to the api. For plotting a handful of paths this really does not impact processing time sigificantly.

After the underlying graph structure is determined the graph mode is set to drive. Drive captures the road network used by automobiles. Bike capture the path network used by bicycles. Walk capture the walkway network used by pedestrians. Finding an optimal walkway is usually too resources intensive when processing due to the fact that their are many more nodes on the walking graph.

Finally the graph can be requested and downloaded from the OSMnx api. The graph perimeters are set in the parameters and passed to the api request. The graph mode is also passed along.

Alternatively a map can also be requested via the place instead of using coordinates. This may be useful for requesting larger maps and storing them locally in the cache.

Next the nearest node in the graph network is found for both the origin and target coordinates. It could for example be that the origin or target does not fall on the road, bike, or walk grid in the OSMnx graph network.

Using the shortest_path function provided by NetworkX the optimal route is found using the dijkstra as the method and the length between the nodes as the weight. Another method is the bellman-ford algorithm.

Finally the optimal path and its geocoordinates are returned via the route variable and stored in longitude and latitude arrays.

To conclude the function the optimal path is then returned as two arrays, longitude and latitude.

Now that the function for finding the optimal paths between two points generate_path(origin_point, target_point, perimeter) is setup a function to plot the results on the Plotly map is created. This function takes the origin point the target points and the optimal paths provided by two lists as longitude and latitude.

First inside the function a Plotly map figure is created and the origin point is defined as black marker.

Next the optimal paths are added to the Plotly map figure as a yellow color.

The target points are also added as yellow markers.

Next the style of the map layout is determined. The light theme from Mapbox was used. An API access token from Mapbox can be acquired for free after signing up. Mapbox has many beautiful maps from a variety of contributors. These look nice in academic papers. Remember to attribute the map creator. Times New Roman was used and the shape was set to a square.

Next the center of the map was manually added. There are methods for calculating this, but not included in this tutorial. An easy way to determine the map center is to look at Google Maps and gauge it that way. It may be better to include the map’s center with the function parameters.

Finally the function saves the map as a jpg in the output folder as dijkstra_map.jpg and then generates an interactive Plotly map in the default OS browser.

Now that both functions are set up the main section of the script is written.

Next the origin point is defined.

Lists are declared to store the optimal paths.

Using the list of target points from the data folder our generate_path function is called to return an optimal path for every target point. The perimeter can also be set here.

Finally our plot_map function is called after getting the optimal paths.

The result is presented below:

Generating optimal paths may be particularly helpful for example when visualising and understanding graph neural networks, or GNNs, in for traffic forecasting.

The GitHub repository can be found here.